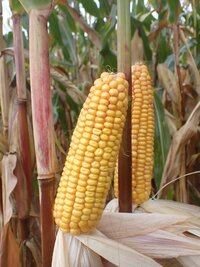 The latest maize varieties are pushing energy yields to levels not seen in the UK before with, says DSV’s Michael Farr.
The company’s new flint/dent variety Petroschka, for example, can achieve 235,000 MJ/ha with simple management making it one of the most reliable and productive options for AD plants, he points out.
“To put that energy yield in perspective, the average for the top ten varieties on the BSPB’s forage maize descriptive list for varieties suited to favourable sites is less than 220,000 MJ/ha.
“In the right growing conditions, that means Petroshka can deliver 5 – 10% more energy from every hectare grown compared to the highest mainstream performers in the UK.
“Whether for energy or grain production, that’s a sizeable increase in output being delivered from the plant’s genetic ability to use light, water and nutrition to their full potential.”
Sitting at the top end of the BSPB’s new descriptive list for very favourable sites, Petroshka achieves a drymatter yield of 104% of control at 20.6t/ha with a starch content of 32.4% and an ME of 11.27 MJ/kg DM, he explains.
“These high levels of energy are easily accessible as the variety has a cell wall digestibility of 57.3% plus it’s an easy variety to grow with a standing power of 7.0 and a low risk of lodging and brackling.
“It’s obviously going to do best in areas of the UK with high levels of heat units and its mixed flint/dent grain mean it could be used equally as well as a quality forage for dairy cows and beef production, but its ideally suited to AD and grain production.”
Another good high energy option for AD growers is DSV Movanna, Michael Farr points out.
“Movanna has a slightly lower energy yield than Petroschka at 224,000 MJ/ha but shares the same easy-growing characteristics and reliability.
“It’s been grown in the UK successfully for 5 years now and features strong early vigour so plants outcompete weeds well in the first few weeks of growth plus it’s proven exceptionally resistant to eyespot.
“It’s got good all round agronomic performance with one of the lowest lodging scores on the latest BSPB descriptive list for very favourable areas.”
For growers looking to combine high energy yield with slightly earlier maturing, the variety Likeit is a good option, he believes.
“Likeit achieves an energy yield of 209,000 MJ/ha on the BSPB descriptive list for favourable sites but its big advantage is that at FAO 180, it’s an early variety meaning it can be grown in most UK maize areas plus it’s suited to virtually all soil types.
“It’s got very good disease resistance and although it’s a fairly tall variety it’s got really good standing ability.
“It’s a great choice for those wanting to grow maize for AD, as well as for livestock nutrition, who might not necessarily be in the best regions of the UK for growing the crop.”